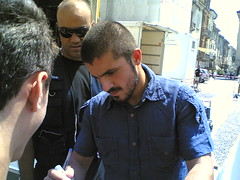 AC Milan midfielder Gennaro Gattuso has been suspended for four UEFA matches by the UEFA Control and Disciplinary Body, following incidents that took place at last Tuesday’s UEFA Champions League round of 16 first leg against Tottenham Hotspur FC in Italy.

The Control and Disciplinary body ruled that Gattuso had assaulted the Tottenham Hotspur assistant coach Joe Jordan after the match.

Gattuso, who was also cautioned in the 76th minute of the game, is already suspended for the return leg of the UEFA Champions League tie against Tottenham after receiving three yellow cards. Consequently, the four-match suspension applies to the next four UEFA club competition matches for which he would be eligible.

An appeal may be lodged against the verdict within three days of the dispatch of this decision.