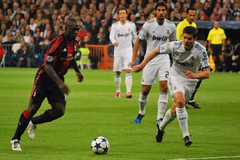 Clarence Seedorf has signed a one-year contract extension that will keep him at AC Milan until the end of next season.

“We didn’t negotiate for very long, we came to an agreement last week and today we needed just 10 minutes to sort out the details,” said Seedorf. “I’m very happy Nesta, Ambrosini and Inzaghi have renewed their deals, we’re the old guard and it’s important to have us in the team.”

Seedorf is the only player ever to have won the Champions League with three different clubs—winning it four times in total—in three different countries while he also lifted league titles in Spain (with Real Madrid) and Holland (twice with Ajax).

And he is hungry for trophies:

“Now we can concentrate on important objectives. After the title this year we must try to take a step forward in the Champions League, which is something that I still find very stimulating.”

It has been a busy offseason for Milan already. In addition to extending the contracts of the veterans they have also signed defenders Philippe Mexes and Taye Taiwo. In addition, Thiago Silva extended his contract to 2016 and Kevin-Prince Boateng was snapped up permanently from a part-ownership agreement with Genoa.