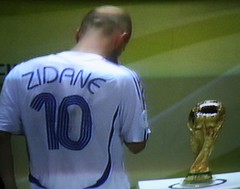 Zidane, who played for Real Madrid between 2001 and 2006, and has been a special advisor to club president Florentino Perez told eporters on the sidelines of a charity match in Madrid that

“I will be the first team’s sporting director,”

The three-time FIFA World Player of the Year said he was still not sure what his functions would be, although Spanish media said it would involve working more closely with Real coach Jose Mourinho.

“We will see. Everyone asks me the same thing,” he said, adding he will begin his new role on Monday. “Mourinho influenced this decision, but also Florentino,” Zidane added. “Real Madrid is the most important thing that happened to me, both as a footballer and as a person. I will continue to work with the club because it is the best.”

Real have not officially announced Zidane’s new role, but the hiring is not a big surprise considering that the club have been without a sporting director since Jorge Valdano at the end of last season, after falling out with Mourinho over transfer targets.