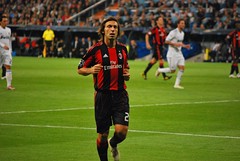 AC Milan are facing an injury crisis ahead of their Champions League match with Tottenham Hotspur next month.

Centre-back Alessandro Nesta is doubtful for the first leg after dislocating his left shoulder while Rossoneri coach Massimiliano Allegri also faces an injury headache in midfield.

Nesta had to be taken off after only 23 minutes Sunday against Cesena and has been diagnosed with a dislocation, rather than a fracture. Milan’s medical staff say that Nesta will be out three to four weeks which should keep him out of the first leg on 15 February.

Meanwhile, midfielder Gennaro Gattuso suffered a right thigh strain in the warm-up against Cesena and he is expected to be out for at least three weeks, which will cause him to miss the 1st leg of the Spurs game. Clarence Seedorf also sat out the game at the weekend with a similar problem and will be out for at least two weeks, making him a doubt for the Champions League game. Also, Andrea Pirlo has missed Milan’s last two matches after the recurrence of a thigh injury and there is no news on whether he will be fit in time for the Champions League game.

The injuries in midfield caused Milan coach Massimiliano Allegri to play 18-year old Alexander Merkel, 18 and centre-back Thiago Silva in midfield against Cesena on Sunday. That is not a pairing that will cause Spurs fans any sleepless nights.