Man United Go Back To Top Of Premier League 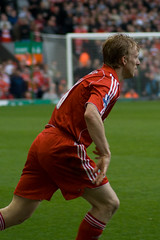 Even though full-back Rafael was sent off but 10-man Manchester United still kept their unbeaten record as they went back to the top of the Barclays Premier League on goal difference after a 0-0 draw against Spurs.

Wayne Rooney brought a couple of smart saves from Tottenham goalkeeper Heurelho Gomes and Rafael van der Vaart also went close on two occasions for Tottenham. But in the end the two sides cancelled each other out in a game which proved the title race is going to be tight right until the end.

The draw sees Tottenham, who have not beaten United since May 2001 in a run which now stretches 24 matches, stay fifth a point behind Chelsea and outside the Champions League places after a game which was long on effort and passion but short on quality.

At Anfield, Dirk Kuyt scored from the penalty spot as Liverpool drew 2-2 with Everton. Liverpool manager has still to win in Kenny Dalglish’s second spell as Reds manager.

Raul Meireles picked the perfect time to score his first goal to give the club he joined in the summer an interval lead but Sylvain Distin and Jermaine Beckford soon turned that around after the break. But the Reds earned a deserved draw when Kuyt stroked home his fifth Merseyside derby goal from the spot to ensured the 215th meeting between the sides finished all square.

Magpies skipper Kevin Nolan looked to have won the game, but with the clock having ticked into the fourth minute of injury time, Gyan almost involuntarily nudged the ball over the line after keeper Steve Harper could only parry Phil Bardsley’s shot to snatch a point his side barely deserved.

James Collins rescued a precious point for Aston Villa in a clash with local rivals Birmingham which ended 1-1 at St. Andrew’s.

Blues defender Roger Johnson put Alex McLeish’s side in front early in the second period. But Collins made no mistake from close range to salvage a share of the spoils for Villa.

Villa dominated the opening phase and final part of the game and hit the woodwork on three occasions. But Birmingham also squandered several clear-cut opportunities.