Lazio Jump above Inter Into Third 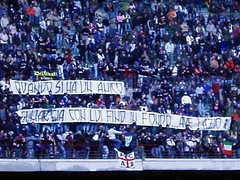 Lazio are up to third in Serie A after they won 2-0 against Brescia and Inter Milan lost 1-0 at Juventus.

Inter began the day in the top three behind pacesetters AC Milan and Napoli, both victorious on Saturday, but dropped down a spot after headers from Álvaro González (17) and Libor Kozák (58) gave Lazio the points against Brescia.

Leonardo’s men had the chance to respond when they visited the Stadio Olimpico in the late game, yet they came away with nothing following Alessandro Matri’s clinical header after half an hour.

Sandwiched between the Nerazzurri and sixth-placed Juventus are Udinese, who won 3-0 at second-bottom Cesena, Antonio Di Natale scoring twice to take his league tally to 18 for the season. Propping up the standings, six points adrift of Cesena, are Bari, held 0-0 against Genoa.

There were goals aplenty elsewhere in the Italian top flight, with Fiorentina and Cagliari finding the net four times apiece in victories against Palermo (4-2) and Chievo Verona (4-1) respectively. Catania beat ten-man Lecce 3-2, while Sampdoria were 3-1 victors against Bologna.