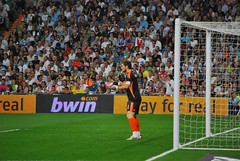 Barcelona and Borussia Dortmund have had dominated their respective leagues this season, but both were surprised this weekend as Barca saw their record run of victories brought to a halt while Dortmund were held to a draw in the Bundesliga. Elsewhere, AC Milan and Manchester United both recorded morale-boosting results.

Spain
Real Madrid were able to knock two points off Barcelona’s lead as Josep Guardiola side, victorious in their last 16 league fixtures, were held to a 1-1 draw by Sporting Gijón. Real Madrid had captain Iker Casillas sent off after just two minutes into their trip to Espanyol on Sunday, but they managed to grab all three points thanks to a goal from Marcelo and breath some new life into their title challenge.

Germany
Dortmund’s advantage atop the Bundesliga is down to ten points after Jan Morávek struck in the final minute to earn Kaiserslauten a 1-1 draw. Bayer 04 Leverkusen beat Eintracht Frankfurt 3-0 to stay second, three points clear of Bayern Munich, with the titleholders 4-0 victors against 1899 Hoffenheim. Bottom-placed Borussia Mönchengladbach sacked Michael Frontzeck after losing 3-1 at St Pauli.

France
It is as you were in the upper echelons of Ligue 1, with Lille still on top after defeating Toulouse 2-0 on Sunday. Rennes remain five points behind after they beat Nice by the same scoreline and champions Marseille lie another point adrift following their 2-1 win against Sochaux.

Italy
There was no change to the top two in Serie A, Milan upholding their three-point cushion over Napoli following a resounding 4-0 win against Parma. Robinho scored twice to keep Milan ahead of Napoli who beat Roma 2-0. Lazio moved into third, a further four points off the pace, after they defeated Brescia 2-0, and Inter Milan were beaten 1-0 at Juventus.

England
Man United won the big Manchester derby 2-1, a result that all but ends City title hopes. Wayne Rooney’s stunning overhead kick proved decisive for United, who are eight points clear of City having played one game fewer. Arsenal remain second, four points back, after a 2-0 win against Wolves which came courtesy of Robin van Persie’s ninth and tenth goals in his last seven appearances.

Elsewhere
Rangers issued a statement of intent in the Scottish Premier League with a 6-0 triumph against Motherwell on Saturday. Celtic, having played two games more, nonetheless maintained their five-point lead by prevailing 3-1 at Dundee United.