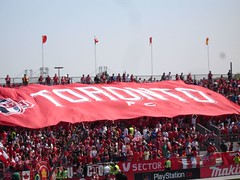 Juventus has added a second date to its upcoming U.S. pre-season tour and they will meet legendary Portuguese side Sporting Lisbon at BMO Field in Toronto on July 23 (7 pm ET kickoff).

Juventus had previously announced that they will meet Mexican side on July 26 at Citi Field in Queens, N.Y.,

Juvw are expected to have one other game while in America and to be notified when Juve’s other game is announced and when tickets go on sale, please leave your name below: