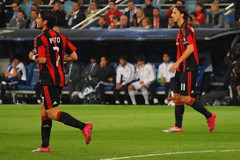 AC Milan will possibly have to make do without the services of star attacker Zlatan Ibrahimovic for up to four matches in the wake of the Sweden international’s red card against Fiorentina on Sunday.

Ibra returned to the Milan starting lineup in the away match against Fiorentina at the weekend after serving a two-game ban following his red card against Bari on March 13, but his comeback wasn’t as successful as he would have hoped.

Ibrahimovic first picked up a yellow card in the 77th minute before being shown a straight red about ten minutes later following an outburst towards the assistant referee.

The striker’s eighth yellow card of the season results in an automatic one-match ban, while the Italian FA are likely add two further games for insulting the linesman and an additional one for receiving his second red card in two consecutive games, totalling to four matches. A decision on the full extent of Ibra’s suspension is expected on Tuesday.