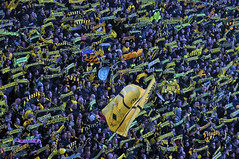 The title races in both France and Germany took another turn this weekend, while AC Milan and Manchester United took anther step towards winning their respective championships.

France
The Ligue 1 title race tightened as leaders Lille were upset 1-0 by Monaco. Luckily for Lille, there other title contenders failed to take full advantage of Lille’s defeat. Marseille were held to a 2-2 at home to Toulouse, while Rennes lost 2-0 at mid-table Stade Brest. That all suited Lyon, who leapfrogged Rennes into third by beating Lens 3-0 and now are only five points behind Lille.

Germany
Borussia Dortmund’s lead at the top of the Bundesliga is down to five points after they needed an injury-time goal from Jakub Błaszczykowski to rescue a point against Hamburg. Second place Bayer Leverkusen had to come from behind also, but they were able to beat St. Pauli 2-1. The powers that be at Bayern Munich were less impressed with their 1-1 draw, at FC Nürnberg, and they immediately fired Louis van Gaal’s reign as they slipped to fourth.

Italy
With AC Milan last in action on Sunday, Inter Milan stepped up their championship bid, and responded to back-to-back defeats against their city rivals and Schalke, by winning 2-0 against Chievo Verona on Saturday. Napoli upped the ante with a 2-0 win at Bologna but Milan just about kept their heads, winning 2-1 at Fiorentina despite Zlatan Ibrahimović’s late dismissal. This was Ibrahimović’s first game back after serving a two-game ban from his previous red card incident.

Spain
Barcelona and Real Madrid rung the changes as they bid to set up a semi-final meeting in the Champions League with last-eight progression in midweek, but it made little difference as both triumphed again. Josep Guardiola’s side maintained their eight-point cushion by coming from behind to beat Almería 3-1 while Madrid were impressive 3-0 victors at Athletic Bilbao. The best of the rest squared up on Sunday with third-placed Valencia thrashing fourth-place Villarreal 5-0.

England
The top three all won in England with Manchester United still in prime position for the title after their 2-0 victory against Fulham on Saturday. Arsenal won 3-1 at Blackpool to stay seven points adrift with champions Chelsea four further back after edging Wigan 1-0.