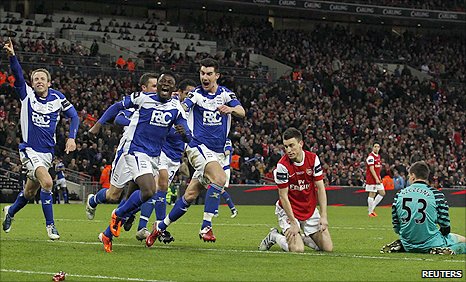 An 89th-minute goal by Obafemi Martins brought Birmingham City only their second ever League Cup win after a dramatic 2-1 victory against Arsenal at Wembley Stadium.

Once Robin van Persie had cancelled out Nikola Žigić’s 28th-minute header six minutes before half-time, the odds looked like Arsenal would go on to win the match and end their six year trophy drought. But just as extra time began to look inevitable, a horrible mix-up between Arsenal goalkeeper Wojciech Szczęsny and Laurent Koscielny gifted substitute Obafemi Martins the easiest of chances to score a last-minute winner.

Birmingham almost got off to a great start inside of three minutes when Bowyer was free on goal and was pulled down by Szczęsny. Should have been a penalty and a red card, but the linesman came to the Gunners rescue saying Bowyer was offside. A vert poor decision.

Arsenal created their first goalscoring chance on eight minutes, when Andrey Arshavin’s shot on the turn was saved by the excellent Ben Foster. Samir Nasri next displayed great skill to trick his way past three players, before finishing his mazy run with a shot just wide.

Save for speculative shots by Keith Fahey and Craig Gardner, Alex McLeish’s men had threatened little before they scored. Once again it was a set-piece that caused Arsenal trouble. Roger Johnson won the original corner and his header was met by Žigić who scored from close range.

Van Persie almost responded instantly, meeting a Bacary Sagna cross with a flying header that went wide, then Szczęsny still had to save bravely at Žigić’s feet on 34 minutes to prevent City from going 2-0.

Then Arsenal’s acting captain, Robin Van Persie dragged his team back into the game after Jack Wilshere’s shot ht the crossbar. The rebound found Arshavin and his cross was volleyed in by van Persie.

The second half was as open as the first, Sagna continuing to cause problems down the right and feeding Tomáš Rosický, who only narrowly missed the far post. At the other end, Fahey went even closer, hitting the foot of Szczęsny’s upright with a snapshot from the edge of the area.

As time ticked on, Arsène Wenger’s men began to turn wear down Birmingham, Nasri breaking loose to force a fine save from Foster, before Nicklas Bendtner and Nasri, again, also brought the best out of the former Manchester United FC goalkeeper.

But, with the match seemingly destined for an extra half-hour, Birmingham stunned the Londoners with a sucker punch. Žigić’s seemingly innocuous header was fumbled by Szczęsny, with Koscielny neglecting to clear his lines, and Martins was able to stroke the ball into an empty net to hand Birmingham their first taste of Europa League football next season.