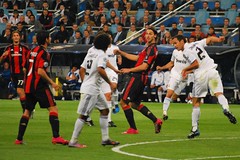 Since signing for Milan this summer, Ibra has scored 17 times in 26 games and has assisted on 10 other goals. Allegri is convinced that Ibra has played a huge role in Milan’s rise to the summit of Serie A.

“There is no better player in the world than Zlatan Ibrahimovic.” the Milanese coach told SportItalia. “Alongside Messi, he is the absolute strongest. He has character, determination and this year he has been decisive on many occasions.”

Ibra has had a remarkable career and is looking to win his ninth league title this season. Yes he is one of the best players in Europe but I don’t see him in the same class as Messi and Ronaldo.

Do you agree with Allegri’s comments?