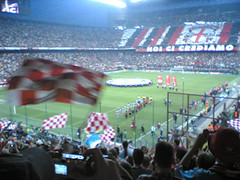 The Bird Nest stadium in Beijing, China, is not a lucky ground for Inter Milan. A couple of seasons ago Inter lost to Lazio here and on Saturday they lost 2-1 to bitter rivals AC Milan in the Italian Super Cup final

Starting the game in a pretty new modified 3-5-1-1 system, the Nerazzurri, lead by Gianpiero Gasperini managed to play much better in the first half as their extra midfield players simply crowded out Milan’s who only played three man in the vital area. Inter’s hold on the first half was gifted with a wonderful free kick goal, which was well taken by Wesley Sneijder, whose curler simply beat Cristian Abbiati’s on the Rossoneri’s goal, although the keeper seemed to take a rather questionable positioning.

The goal lifted Milan a bit though as they were ending the half in a much better fashion with Zlatan Ibrahimovic almost equalized in the last few minutes after his header struck Julio Cesar’s back post, despite Inter’s goalie was simply stranded. Having to chase the goal in the second period, the Rossoneri started the half stronger than the first and bit by bit taking control of the match from Inter, as Robinho and Seedorf started to give more problems for the Nerazzurri players.

Milan’s improved display in the second half got a reward in the 60th minute after Ibrahimovic headed a wonderful cross from Clarence Seedorf, who earlier received a wonderful through pass from Robinho. The equalizing goal simply spurred Milan on as eight minutes after Ibrahimovic’s equalizer, the Rossoneri compete their comeback with a goal from Kevin Prince Boateng, who tapped on substitute, Alexandre Pato’s shot, that ricochet of Inter’s back post.

Playing in a competitive game in such a humid condition simply tiring for both teams as it can be seen from the players, who were simply exhausted in the last 10 minutes, as many misplaced passes, poor movement of the ball became the highlight of the game. Inter, who were chasing the game couldn’t really do much with their tired legs aside from an offside goal made by Samuel Eto’o, that was clearly ruled out by the linesman, despite small disappointment from the Nerazzurri players.

Despite having five minutes of extra time, both teams simply failed to do something more in the game allowing the tie ended in a 2-1 victory for Massimiliano Allegri’s team, who secured his second title with the Rossoneri after joining from Cagliari last year. Milan can be a bit proud about their victory considering they’re not actually in the best condition as it still very early in the pre-season, albeit the same condition for the Nerazzurri, Gasperini’s team actually had much more intense preparation than their city rival as the Red and Black squad only did played three friendlies ahead of the Super Cup.