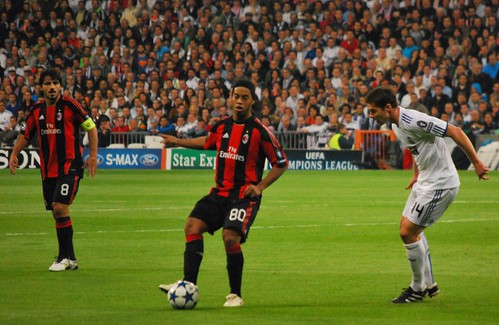 Lot’s of rumors about where Ronaldinho will be playing next season. The Brazilian magician is out of contract at AC Milan at the end of the season. It was only a few short years ago that Ronaldino was the best player in the world, but recently he seems more likely to be in a disco than on the training pitch.

Still, he is still a player with immense talent, and he puts seats in the stadium. Here is a look at some of Ronaldino’s possible destinations:

Returning home to Brazil is certainly an option and Gremio is one club that would like to bring Ronaldino home. He started his professional career with Gremio in 1998 and Ronaldinho’s brother and agent, Roberto de Assis Moreira was quoted recently as saying he was “pleased with the possibility” that the player may return home, adding that “one day, I don’t know when, he will once again wear a Gremio jersey.”

Palmeiras and Flamengo are also said to be interested in signing Ronaldinho.

Manchester City, who are linked with everyone it seems, were close to signing Ronaldinho last season according to Tuttomercatoweb.com. City are one of the few teams that could afford Ronaldinho’s £6.3 million-per-year salary demands.

There have been rumors for the last twelve months that Ronaldinho is going to join David Beckham and the LA Galaxy this summer.Signing Ronaldinho would be a big coup for Major League Soccer who could probably offer him a salary close to what Man City would offer.

So some big decisions for Ronaldhino. Does he go with the big money (Man City), life in the sun (LA Galaxy) or does he return home to Brazil. Where do you think he will play next season?