Spurs and Chelsea end up 1-1 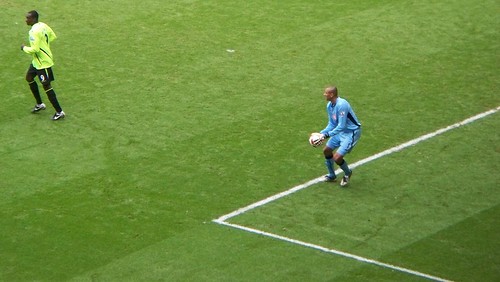 In an end-to-end thriller Spurs and Chelsea drew 1-1 at White Hart Lane as a Didier Drogba missed penalty in stoppage-time meant that the Champions Premier League winless run is now up to five matches.

Heurelho Gomes, who conceded the penalty and gifted Chelsea a goal with a complete howler redeemed himself by saving Drogba’s penalty kick.

Spurs dominated the first half and went ahead with Roman Pavlyuchenko’s ninth goal of the season. Pavlyuchenko took a great ball from Defoe, easily got away from John Terry and smashed the ball past Petr Cech.

Salomon Kalou twice went close to levelling for Chelsea in the first half. First stretching to send Ramires’ cross over the top and then heading straight at Gomes from six yards.

In the second half Carlo Ancelotti brought on Drogba to partner Anelka up-front and suddenly Spurs were on the back foot as Chelsea took the game too them.

The Champions got back on level terms when a long ball found Drogba down the left channel. Drogba held off Dawson before lashing a volley that went straight through Gomes and into the net. A really bad goal to concede.

A draw was probably a fair result as each team dominated a half. The point leaves Chelsea in 4th place, one point behind leaders Arsenal who play Man United tomorrow and Spurs in 5th place, still four points behind Chelsea.