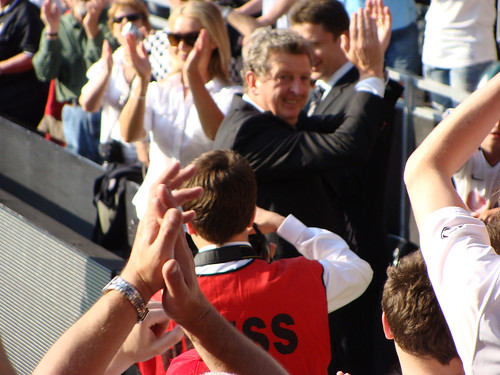 You know a manager is feeling the pressure when he starts to blame the fans, and that is exactly what Roy Hodgson did today.

Hodgson’s side are only three points above the relegation zone after last night’s 1-0 defeat at home to bottom side Wolves and he was not happy to hear the Kop singing the name of former player and manager Kenny Dalglish, a living legend at Anfield, and also ironic chants of “Hodgson for England”.

“I haven’t had a lot of support from the fans ever since I came here” said Hodgson. “The fans have not been happy with what they have seen in the whole of 2010 and since I came here we have not won enough games to keep them happy. That is understandable in the sense that they were hoping when I came here the latter part of last season would be forgotten and we would start flying again. That hasn’t happened and as a result, as manager, you are the one in the firing line, but of course it doesn’t make the job easier because it makes the players more nervous. I can only say as a manager you have to understand that fans care for their club and want it to do well and when it is not doing well they voice their disapproval. It is a vicious circle and in order to break it we have to start playing well and winning matches because if we don’t they are going to reserve their support until such time as we can do it.”

Hodgson is in a really difficult position at Liverpool. He is not the choice of Boston Red Sox ownership group as he was hired by the previous regime. He also inherited a squad where prime assets like Mascherano and Xabi Alonso had been sold by Gillette and Hicks without being replaced by similar quality players. As a result Liverpool’s squad has taken a step backwards over the last two years while their rivals have all improved their squads.

Liverpool fans have been called some of the best in the world and the trip to Anfield is must for any serious football fan. Liverpool’s Kop is world famous for its rendition of ‘You Will Never Walk Alone” especially on big European football nights, something that Roy Hodgson has not had a chance to experience yet.

So this is what support from the Kop sounds like Roy: