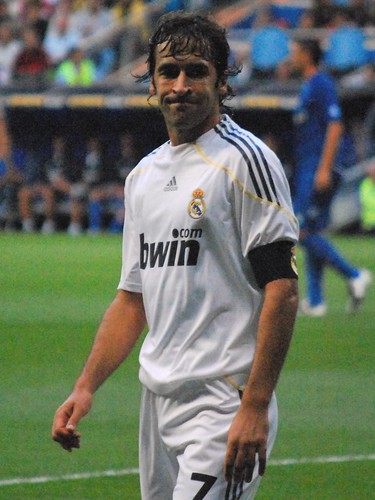 Raul will go down as one of the best players to ever wear a Real Madrid shirt. He scored 323 goals in 741 games for Real Madrid and helped them win three Champions League trophies and 16 titles in total while at the club.

But the 33 year-old has bid farewell to Real Madrid fans saying in his farewell press conference:

“It’s a hard day for me. I feel like a footballer still and I will keep on playing, but I will always be loyal to Real Madrid. I have tried to give everything in my time here. “Being a Real Madrid player is the greatest dream you can imagine. Today more than ever I want everybody to know that in every move, dribble, turn or gesture on the field of play, I tried to give the best I could. In my head the word surrender has never existed, because that is what Real Madrid is about.”

Raul is not retiring and the question is where will he play next with Schalke is likely destination. On his next step Raul said:

“The German team is interested in me and I have had very deep discussions with them. In a few days I will know whether I’ll be going to the Bundesliga, but there are other teams that are also interested. What is clear is that my future lies in Germany or England.”

“We will never forget Raul. There are many men who form part of the legend of Real Madrid, but few that are chosen to embody the club – Raul is one of those.”

Raul is the second Madrid veteran to leave in the last week, following the departure of midfielder Guti, who had spent just a year less than Raul (15) in the first team.