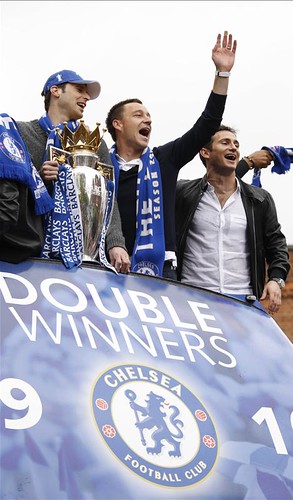 Last September the chairmen of the Premier League teams agreed to new squad rules changes andit seems that managers have only know started to realize the consequences of the new rule.

Basically the squad rules says that each Premier League club must name their 25-man squad by September 1, the day after the summer transfer window shuts. Within the 25-man squad each club must have 8 “home grown” players. A “home grown” players is defined as someone who has spent at least three years training with an English or Welsh professional club before they reached the age of 21.

At first glance the rule does not seem that bad as its aim appears to be to make teams play more younger home-grown talent and to prevent the biggest clubs stockpiling talent. But consider that last season Portsmouth used 33 players, while the average Premier League club used 27, picking 12 English players and seven under the age of 21. Now the only players that can be added to the squad between September 1 and December 31st are players who are under the age of 21 on January 1, 2010.

So what happens if a team has less than 8 “home grown” players? They have to name a smaller squad!

What teams are most effected by this rule?

The biggest impact will be felt at Man City who have 38 players in their squad, of which only 5 are under the age of 21. That means that some big names like Robinho and Jo either have to be sold or they will have to sit on the sidelines until January.

Liverpool currently have only five senior home-grown players in their squad which is one reason why Roy Hodgson has been targeting English players.

At Chelsea the problem is the number of experiences players in the squad. In order to add any nee foreign signings, they will have to let an experienced player leave.

Another way the ruling will impact clubs is with injured players. Owen Hargreaves at Manchester United and Fulham’s Andy Johnson are both struggling with long-term injuries that will see them miss the start of the season. Man United and Fulham will have to make a decision on whether to keep one of the 25 squad sports open for them, or to leave them out of the squad until January.

Tottenham manager Harry Redknapp said on Monday former England defender Jonathan Woodgate won’t get a place in his plans for the season saying:.

“I couldn’t put him in my 25. You can’t have somebody in who’s never going to play, if he’s not going to be fit. He’s got to prove that between now and the start of the season and he’s a long way off.”

One impact of the rule is that the value of home grown players is going to continue to soar because they take up one of the 8 spots and allow the manager to add more foreign players to the squad. Expect to see teams selling more players in the coming weeks as they move to get under the 8 and 25 man rules.