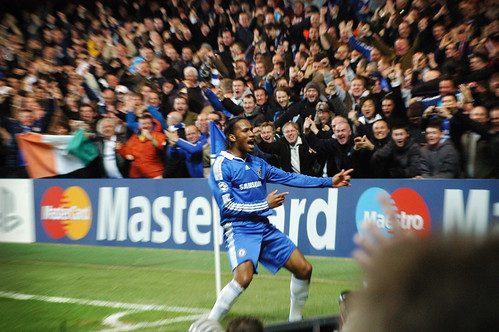 Another poor performance by Chelsea saw them drop two more points as they drew 1-1 with Everton at Stamford Bridge. The result left Chelsea with just one win in their last six league games and in team were booed of the park at the end of the game.

Chelsea struggled from the opening whistle and almost conceded a goal in the opening seconds when Louis Saha’s shot from 20-yards forced Petr Cech into a fine save at his near post. Moments later Leighton Baines fired high over the bar with Chelsea still struggling to get to grips with the high-octane opening from the visitors.

Chelsea’s first real attack arrived in the 12th minute when Drogba put Nicolas Anelka ahead of the visiting defence, but Anelka’s shot was blocked by Phil Jagielka.

Chelsea started to turn up the pressure and had an appeal for a penalty turned down when Jose Bosingwa’s cross appeared to hit the hand of Sylvain Distin. Then in the 27th minute captain John Terry, hit the woodwork with Howard beaten.

Chelsea eventually got the goal they deserved 5 minutes before half-time, when Anelka pounced on a poor back pass from Neville and was brought down by Howard. Somehow referee Lee Probert decided to only give Howard a yellow card, and not the red card he should have received.

From the resulting penalty, Drogba stepped up and put Chelsea one up.

The meant that Everton had to come out and attack Chelsea in the second half which meant it was a more exciting game to watch. With Everton pushing forward, Chelea were able to play more on the counter-attack and Drogba should have done scored when Bosingwa’s cross allowed him time to turn inside the penalty area. But his shot was weak and easily saved by Howard.

Everton almost levelled in the 61st minute when a cross from Leighton Baines was headed against the inside of the post by Rodwell and Chelsea were forced to defend deeper and deeper as Everton were controlling the midfield.

Four minutes from time, Everton’s pressure paid off when a cross from Baines was headed back across the six-yard box for substitute Beckford to head home.

So another poor performance by the blues who missed a chance to go back to the top of the table. Over the last five years or so, Chelsea have always played with a confidence, that they will wear you down and beat you.

This season, Chelsea seem to be really struggling with confidence, going back to the pre-season. When things go against them, they are struggling to fit through the adversity and win the game.