Arsenal go to top of the Premier League 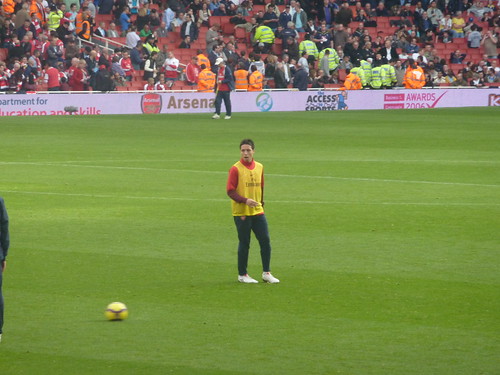 Two Sami Nasri goals were enough to send Arsenal top of the Premier League as Arsenal beat Fulham 2-1. That win combined with Chelsea‘s draw with Everton and the Manchester United v Blackpool postponement meant that Arsenal now have a one point lead at the top of the table.

After two home loses in November, it was imperative that Arsenal grabbled all three points from this game and the Gunners got a perfect start when Nasri scored after 14 minutes.

With Arshavin and Nasri pulling the strings in midfield the only question seemed to be how many would Arsenal score today. Chamakh and Song both missed great opportunities to add an Arsenal second, but they both squandered good opportunities.

Those misses came back to haunt Arsenal as they gave up a comedic equalizer. Squillaci and Koscielny collided going for the same ball and Clint Dempsey took full advantage of the carnage to slide in Kamara, who sidefooted home.

It appeared that Squillaci headed Koscielny instead of the ball on the play and Koscielny had to be carried off on a stretcher and was replaced by Djourou.

The goal gave Fulham confidence and they came into the game more and it looked like this was going to be another frustrating day for the Gunners as both teams had good opportunities to score.

Just when it looked like Arsenal would drop even more points at home up popped Nasri with 15 minutes to score his second and give Arsenal all three points.

It all came from a typical flowing Arsenal move that finally saw Van Persie square for Nasri around the edge of the penalty box. Nasri waltzed past three Fulham defenders, rounded Schwarzer and pirouetted to score from a tight angle.

It was a wonderful goal and a candidate for goal of the season.

After that Arsenal held on to keep all three points. This was not a vintage Arsenal performance by any stretch of the imagination. But they won without playing well and that is the mark of a good team.

Arshavin and Nasri were terrific today and it was good to see van Persie get another 30 minutes of playing time.

In the other games, Wigan drew 2-2 with Stoke and Blackburn won 3-0 at home to Wolverhampton, which dropped to the bottom of the standings