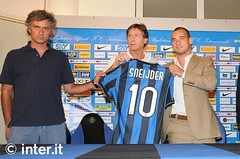 Napoli’s late season swoon continues as they lost 2-1 away to Palermo, a defeat that ends their title hopes. The defeat leaves Napoli third, six points behind league leaders AC Milan with four matches left to play.

The game started perfectly for Napoli as they went ahead from Edinson Cavani’s first minute penalty. But Federico Balzaretti equalised on 37 minutes for Palermo, before Cesare Bovo scored the winner for the hosts from the penalty spot in first-half stoppage time.

Defending champions Inter Milan kept alive their faint title hopes with a 2-1 win at home to Lazio. The visitors went ahead through a Mauro Zarate penalty after 24 minutes at the San Siro, with Inter goalkeeper Julio Cesar sent off for his part in conceding the penalty.

But the 10 men of Inter equalised through Dutch playmaker Wesley Sneijder, before Cameroon international Samuel Eto’o struck the winner seven minutes into the second half. With the win, Inter are now five points behind leaders Milan, who have played a game less.

Lazio remain fourth, one point ahead of fifth-placed Udinese, who lost 2-0 at home to Parma. A goal in each half from on-loan striker Amauri gave visitors Parma all three points at the Stadio Friuli.

Roma, sixth, closed to within four points of Lazio following a 1-0 win over Chievo, with Simone Perrotta scoring the winner for the hosts in just the fourth minute at the Stadio Olimpico.

In other matches, Genoa twice came from behind to dent Lecce’s survival hopes with a 4-2 home win. The defeat sees Lecce slip into the bottom three on goal difference after Sampdoria’s 1-0 victory away to Bari lifted them to 17th.

A pair of goals from Alessio Cerci helped Fiorentina beat Cagliari 2-1 away from home, while Bologna went down 2-0 at home to Cesena.