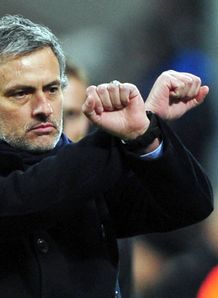 This is amazing. Inter Milan manager Jose Mourinho has been banned from the touchline for three games by the Italian FA after making a handcuffs gesture in Saturday’s 0-0 draw with Sampdoria.

Mourinho will have to watch the games against Udinese, Genoa and Catania from the stands.

In addition to the Mourinho suspension, Inter players were also be missing some Serie A games. Walter Samuel and Ivan Cordoba, who were both sent off in the Sampdoria draw, have received one-game bans.

Mourinho and the suspended players will all be eligible for this weeks Champions League game against Chelsea in Milan.