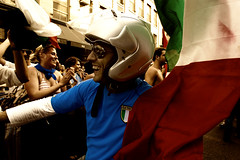 Thiago Motta’s second-half goal gave Italy to a 1-0 victory in Slovenia and helped them open up a six-point lead in Group C.

The Brazilian-born Inter Milan midfielder, making his competitive Azzurri debut, marked the occasion by driving a low shot past Samir Handanovič from the left side of the penalty box after exchanging passes with Federico Balzaretti. The victory, which puts Italy on 13 points from a possible 15, was well merited by the visitors who created the better chances even if they survived a scare when Zlatan Ljubijankič hit the crossbar in the second half.

Italy had arrived in Ljubljana with an inexperienced-looking squad notable for the absences of Daniele De Rossi and Mario Balotelli, left behind by Cesare Prandelli after incurring bans with their clubs. Yet they showed no signs of missing that pair as they took the game to their hosts. After Riccardo Montolivo had forced a low save from Handanovič, Giampaolo Pazzini was close to scoring after 23 minutes as he turned sharply in the box and rattled the near post.

Pazzini and partner Antonio Cassano kept asking questions of Slovenia’s back line and only a brave stop by Handanovič denied the latter, the keeper diving at Cassano’s feet. Slovenia managed no better in the first half than a long-distance Robert Koren effort that drew a fingertip save from Gianluigi Buffon and the direction of play did not change after the restart with Handanovič soon called on to make a trio of saves from Stefano Mauri, Cassano and Alberto Aquilani.

Matjaž Kek’s decision to send on Ljubijankič for Zlatko Dedič after 56 minutes almost reaped immediate reward when, 60 seconds later, the substitute smashed a shot against the crossbar via Buffon’s gloves. With Motta’s 73rd-minute intervention, though, the match slipped away from Slovenia whose late pressure came to nothing as Boštjan Cesar sent an added-time header wide.