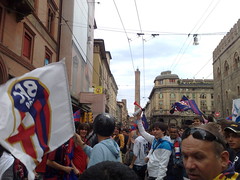 Veteran striker Marco Di Vaio will stay at Bologna after agreeing a new two-year contract with the club. The 34-year-old’s existing deal was set to end at the end of the season.

“I have reached an agreement with the club,” Di Vaio said. “There were no problems. I wanted to remain and the club wanted to keep me. I am delighted because my dream of ending my career at Bologna is realised. I want to thank the club, which at times of difficulty, has found the financial strength for my new contract.”

Di Vaio joined Bologna from Genoa in 2009 and earlier this year turned down an option to return to Juventus. The veteran striker is Bologna’s top scorer with 18 league goals this season.

“At Bologna there is passion, great history, a lot of respect,” Di Vaio said. “I owe everything to this city and this club.”

Bologna are tenth in Serie A with 40 points from 30 games.