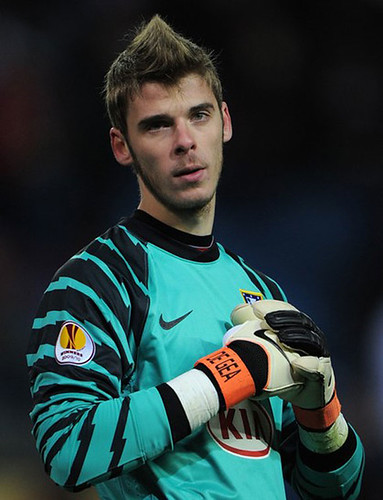 Just as it was expected, after already having his medical on Monday afternoon, earlier today, David De Gea has finally been officially confirmed as the new Manchester United goal keeper after signing a five year deal with the Old Trafford outfit.

De Gea is the third signing already this offseason, following the earlier deals for  Ashley Young and Phil Jones, as  Sir Alex retools his squad to mathc up better with Barcelona.

De Gea has big shoes to fill as the replacement for Edwin Van Der Sar, but the 20-years-old is up to the challenge saying:

“I feel very proud and I can’t wait to start playing here. When a club the sizeof Manchester United comes in for you it obviously makes you very, very happy. I saw their interest as an extra motivation to work even harder to show off my ability. It’s a great privilege to be part of a club like United and I’m keen to do my best and show what I can do,” De Gea said to MUTV

Despite having yet to receive a senior national team call up, De Gea, has been considered as one of the top keepers in Spain as he already managed to win titles such as Europa League and European Super Cup with his former club Atletico Madrid. Not only that, at under 21 level, he has also achieved success as recently the young keeper helped his Spain under 21 squad winning the UEFA Euro u21 championship in Denmark.

Next season will surely be a big test for the young keeper as he will have to prove his capability in the Premier League which definitely has different playing style and football culture than La Liga. Moreover, the pressure of playing in a big club such as Man United will likely be more different that at Atletico Madrid, as United fans can be very critical if a highly rated player can’t perform consistently.