Is Kaka Coming Back To AC Milan? 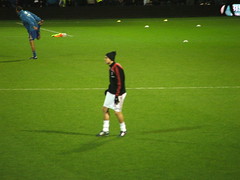 According to today’s edition of the Spanish sport newspaper El Mundo Deportivo, AC Milan and Real Madrid have reached an agreement over Kaka, and that the Brazilian will return to Milan this summer.

Kaka moved to Madrid in the summer of 2009 for around €68m, but has settled in the Spanish capital. he has struggled with injuries for most the last 18 months and he’s again out injured, for at least two weeks.

Reports suggest that Madrid are ready to take a huge loss on Kaka, with a transfer fee reported to be between €20 to 30m.

Adriano Galliani has recently answered to questions about Kaka, saying that “Milan can only afford to hire one Ibra”, referring to Kaka’s high wage-demands, around €9 million per year.

If that is the case, will the return of Kaka to Milan, mean that Zlatan Ibrahimovic will be heading back to Barcelona at the end of the season?