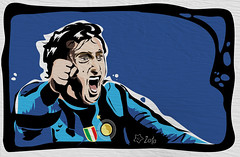 Inter Milan striker Diego Milito is expected to miss the Champions League last 16 first leg game at home to Bayern Munich on Feb. 23 after tests on Monday showed he had suffered yet another hamstring strain.

The Argentine, who scored both goals when Inter beat Bayern in last season’s final, has been dogged by a series of muscle tweaks this term and felt another twinge after coming on as a substitute in Sunday’s 5-3 victory over AS Roma.

He has been out for around month with each of the previous strains and coach Leonardo, who preferred new signing Giampaolo Pazzini on Sunday, offered support to his striker.

“Diego mustn’t worry about what has happened. He doesn’t have to prove anything to anyone,” Leonardo said in a statement. “He knows how important he is for Inter. All he has to do is relax and concentrate on making a good recovery.”

While Pazzini will continue to partner Samuel Eto’o up front in Serie A the former Sampdoria striker is Cup-tied for the Champions League so Goran Pandev is likely to play up-front in with Eto’o in the first leg.