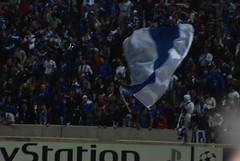 Inter Milan battled for more than an hour with 10 men to book their place in next month’s Champions League final at the expense of holders Barcelona on a triumphant night for the Italian side’s coach Jose Mourinho.

The Spanish holders won the semi-final second leg 1-0 but Inter went through 3-2 on aggregate after a pulsating encounter at Barca’s Nou Camp stadium to reach their first final of Europe’s elite club competition since 1972. They will play Bayern Munich in the final at Real Madrid’s Bernabeu stadium on May 22.

For all their early possession Barca were struggling to create chances and a Pedro volley in the 22nd minute that flashed narrowly wide was their first real effort on goal.

Tempers boiled over five minutes later when Inter midfielder Thiago Motta flung out an arm in a challenge with Sergio Busquets which sent the Barca player tumbling to the turf clutching his face. It was a bad decision by the referee and set up a magnificent rearguard action from Inter who dealt with almost everything the fearsome Barca attack could throw at them.

As the clock ticked down in the second half, substitute Bojan Krkic missed a sitter of a header but a minute later centre back Gerard Pique, moved by coach Guardiola to a last-ditch striking role, made amends with a superbly taken goal in the 84th minute that gave Barca hope. The Spain international controlled the ball in the penalty and showed a striker’s touch to spin away from Cesar and the Inter defenders and slot into an empty net.

With the noise levels rising ever higher, Barca pressed for the goal that would send them through and had an effort from Krkic at the death disallowed after Yaya Toure handled the ball in the build-up.