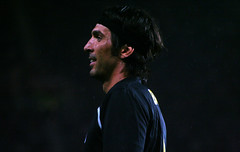 Gianluigi Buffon, who has been out since injuring his back playing for Italy in the opening match at the World Cup this summer, returned to action for Juventus and helped them reach Italian Cup quarterfinals by beating Napoli 2-0.

Juventus took the lead 10 minutes before half-time thanks to a goal from Serbian midfielder Milos Krasic that delighted the crowd in Turin’s Olympic Stadium. Alessandro Del Piero embarked on a mazy run down the left flank and fired a cross to the back post to Krasic, who slammed the ball past Catania goalkeeper Adrea Campagnolo.

Despite Catania’s best efforts to find an equaliser, Simone Pepe snuffed out their challenge on 54 minutes when he found himself unmarked at the back post to power home a first time shot after a corner. Juve will meet either Roma or Lazio in the quarterfinals.

The Coppa Italia fifth round continues on Friday when Napoli host Bologna, while Roma and AC Milan are also in action at the weekend.