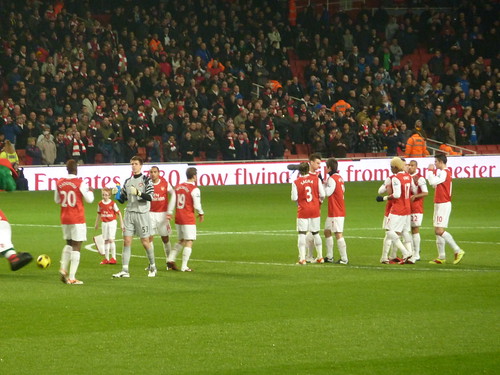 Laurent Koscielny should probably restated his earlier statements saying that the title race will only concern his team, Arsenal, and Manchester United especially after this weekend result where the Gunners throw away a 4-0 lead against Newcastle United.

Coming away from the match with a 4-4 draw against the Magpies doesn’t only cost them a chance in catching United at the top, but the result also brings Manchester City closer again as the rich club convicingly won against their opponent on the same day.

Eying a chance to reduce their gap with United at the top of the table, Arsenal arrive at St. James Park with high confidence which was shown on their early performance on the pitch as the away team already 3-0 up in just 10 minutes with goals from Theo Walcott, Johan Djorou and Robin Van Persie. Newcastle’s suffering in that first period isn’t done you though, as in the 26th minute, Van Persie added his tally and simply making the game looked like under a wrap already just before half time.

That sending off somehow dismantled Arsene Wenger’s side as midway in the second period the worse for the Gunners finally came after Joey Barton converted a penalty after Koscielny’s foul, more goals followed for the home team right away. Starting with Best who calmly slot home the Magpies second in the 74th minute, Barton scored another penalty few minutes later which surely puts the pressure really high for the London side which eventually crumbled three minutes before the final 90 after Tiote scored the equalizer.

After failing to pick up the three point in their latest league game, Manchester City are looking hungry for a win to keep their title ambition alive again. Thanks to their rebel player, Carlos Tevez, that dream are surely alive especially after knowing that two of their closest rivals loses points this weekend. The Argentinian, who previously got himself troubled with the club, once again showed his professionalism on the night by scoring all three of City’s goals against West Bromwhich Albiom.

Tevez opens his account on the game from the penalty spot in the 17th minute after the home team earned the spot kick following a foul on Alexander Koralov by Steven Reid. The Argentinian international added his second on the match just less than five minutes after the first before finally sealing the game’s result and also his tally with a third goal that once again came from the penalty spot.