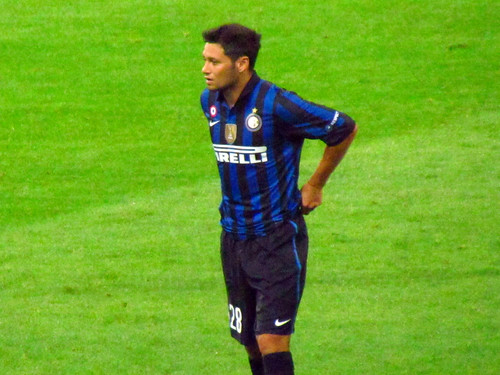 Inter actually went 2-0 up in some stage of the first half but saw their lead leveled midway into the second period before Zarate provide the decisive outcome and simply re-start Inter’s chance in breaking out from their group.

Arriving in Moscow without the likes of Diego Forlan, Wesley Sneijder, Andrea Ranocchia, Dejan Stankovic, Thiago Motta and Douglas Maicon, the Nerazzurri relies on their high motivation after picking up the first victory in Serei A. The air of victory breeze early though for the visitor as they opened the scoring after just six minutes when Lucio capitalized on CSKA’s second keeper, Vladimir Gabulov’s mistake in clearing Ricky Alvarez’s corner, allowing the Brazilian center back easily placing the ball into an empty net.

The early goal stunned the home team, who started to dominate the ball possession but having difficulties in putting up a decent attacking play as the visitor’s defense was barely troubled with the Russian outfit’s attempt in the early part of the first period. Instead of grabbing the equalizer, CSKA went two goal down instead as in the 23th minute, Giampaolo Pazzini tapped in Yuto Nagatomo low cross from the right side, making things looked comfortable for the Nerazzurri.

However, the home team apparently woken up after that second goal as they finally managed to create problems for the Italian side before Alan Dzagoev finally helped his side getting back into the game with a lovely struck free kick deep in first half’s extra time. Dzagoev’s goal burst CSKA players’ confidence as they looked much more dangerous right after the re-start, creating several good scoring chances especially from Wagner Love, who in the end did become the one getting the equalizer for the Russian outfit after wriggles his way through two defenders before launching a fine shot beating Julio Cesar .

However, luck didn’t run away from Ranieri’s Inter in around a minute after CSKA’s equalizer, the Italian outfit took the lead again after Zarate, who came in for Pazzini early in the second half, scored a lovely placed low shot that left Gabulove rooted to the spot. The ex-Lazio man’s goal turned out to be the last one in the match as the home team simply didn’t managed to square things up despite getting one-two more good chances in getting their third on that game.