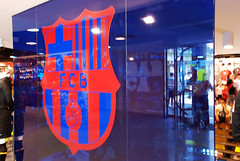 UEFA has charged Barcelona midfielder Sergio Busquets with racially insulting Real Madrid defender Marcelo during the Champions League semifinals. UEFA says its disciplinary panel will hear the case on Sunday with a decision to be announced Monday.

Busquets is alleged to have violated UEFA’s discrimination rules “by directing racist abuse towards” Marcelo, who is black. Marcelo says that Busquest called him a “monkey” during a rough first-leg match on April 27 in Madrid.

UEFA said it took statements from Marcelo and Madrid and used video evidence of a moment when the two players clashed.

If found guilty, Busquets could be suspended for the Champions League Final against Manchester United as UEFA rules state that “anyone who insults the human dignity of a person or group of persons, by whatever means, including on grounds of color” shall be banned for five matches.”

There is no truth to the rumor that when he heard of the charge, that Busquets fell to the ground clutching his face.