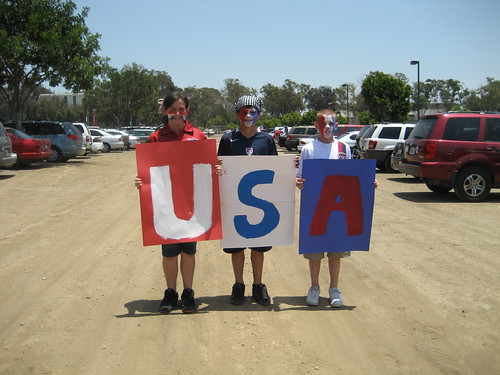 Landon Donovan set up second-half goals by Jozy Altidore and Clint Dempsey, as the U.S. beat Turkey 2-1 on Saturday.

“We’re going to be as good as we want to be,” Donovan said. “And if we play the way we’re capable of playing, we can beat a lot of teams in the world.”

Arda Turan put the Turks ahead in the 27th minute on a counterattack after right back Jonathan Spector was dispossessed upfield.

Altidore tied the score in the 58th minute and Dempsey put the U.S. ahead in the 75th before an overwhelmingly pro-American crowd of 55,407 at Lincoln Financial Field.

This was a game of two halves for the U.S. In the first half, the U.S. defense look really shaky and weak. In the first 45 minutes, the American defense was frequently caught in a kind of no-man’s land as the Turkish forward Tuncay Sanli rushed into spaces between the midfield and the back line. Indecisiveness as a team and individual breakdowns, especially by Jonathan Spector and Jay DeMerit, led to the Turkey goal and their performance must have Wayne Rooney licking his chops.

The introduction of Oguchi Onyewu and Steve Cherundolo at half-time helped settle down the U.S. defense and they looked much more solid as they game progressed.

Up front, it was the introduction of Robbie Findley who helped turn the game around. Findley’s speed caused problems for the Turkish defense and caused them to play a little deeper than they had in the first half and this created pockets of space for Dempsey and Donovan to operate in.

The U.S. tied the score on a play that began when defender Jay DeMerit sent a long ball to Findley. He made a precise pass to Donovan, who sprinted down the right side and rounded goalkeeper Volkan Demirel, pulling him off his line. Donovan crossed to Altidore, who banged the ball into the open net from 5 yards for his ninth goal in 25 international appearances.

In the 75th minute, Cherundolo started the move for a throw-in to Donovan. His cross was met by Dempsey, who fought off Sabri Sarioglu, and scored from about 10 yards.

Overall it was a good 45 minutes of play from the Americans. But if they U.S. it to meet expectations in South Africa and progress from their group, they need to play for 90 minutes in all their games. If they do that the U.S. has a chance to be successful. If they don’t, it will be a tough couple of weeks for American soccer fans.