Stuart Holden Out For Six Months 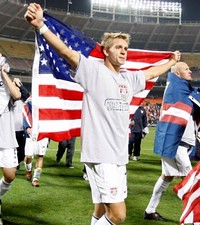 The U.S.’s Stuart Holden is expected to be out for months after being on the receiving end of a reckless red-card challenge by Manchester United defender Jonny Evans Saturday while playing for Bolton.

The two met up in a fierce 50-50 collision late in United’s 1-0 home win, but the Red Devil left the ground with all studs up. Evans caught Holden flush in the knee with his weight behind the tackle, leaving behind a large, visible gash and a more serious injury the club is keeping hidden for now.

“It’s a bad knee injury,” a Bolton spokesperson told MLSsoccer.com on Monday. “He will be out through the end of the season and through preseason — about six months.”

Big blow for Holden, who was scheduled for surgery today. He will now miss out in playing in the FA Cup semi-final at Wembley and possibly an FA Cup final itself. His injury is also a big blow to the U.S. national team who are taking part in the Gold Cup this summer.

Holden has revealed via Twitter that Evans made an apologetic call and that he held no grudge against the Manchester United player.