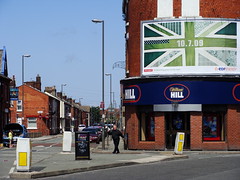 The news that Wayne Rooney’s father and uncle Richie were arrested today over allegations of a football betting scam has to have set off alarm bells at Old Trafford as well as the English FA.

The arrests were in relation to a game between Motherwell and Hearts in December last year in which Motherwell midfielder Steve Jennings was arrested after allegedly getting himself sent off deliberately during the match.

It is believed that there was a pattern of irregular betting, with stakes being put on a red card being given. One was allegedly from a new account opened in Liverpool, from where £500 was staked at odds of 10/1.

“Detectives have today executed warrants at 10 addresses across Merseyside and Glasgow and arrested nine men as part of an investigation into suspicious betting activity. The arrests are the culmination of a joint operation with the Gambling Commission, and the nine who have been arrested for conspiracy to defraud are being interviewed by detectives. The investigation relates to a match between Motherwell and Hearts on 14 December 2010.”

The issue of the uncle and father of a Premier League star being involved in organized gambling has to be a huge concern to English football officials. While we have seen gambling related arrests in other sports like tennis, cricket and Italy’s Serie A, the Premier League has so far avoided any hints of gambling scandals. The arrest of Rooney’s father and uncle brings the issue of gambling in football to the forefront and it will be interesting to see how the Premier League and United handle this.