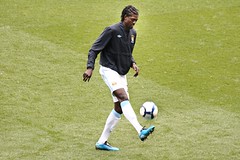 Man City bad-boy Emmanuel Adebayor has been sent to Real Madrid in loan with a Madrid option to make the deal permanent for £13million transfer in the summer.

Real Madrid have spent all month searching across Europe for another striker. They had spoken to City about Adebayor earlier this month but his £148,000-a-week wage deal at City was too rich for even Real Madrid.

But after Adebayor agreed to take a pay cut to move to one of Europe’s glamour teams, the deal was made.

A statement on the Real Madrid web site read:

“Real Madrid and Manchester City have reached a deal that will see Emmanuel Adebayor play on loan. The player will remain at Real Madrid until the end of the current season, at which point the club hold a unilateral option to purchase the player.”

Adebayor joined Man City from Arsenal in 2009 for around £25m. But he fell out of favour with City boss Roberto Mancini over his attitude in training and has only started two Premier League games this season. Even with limited playing time Adebayor has still managed to score five goals in 13 games this season.