Puyol To Have Knee Surgery Wednesday 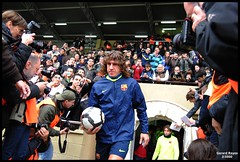 In an indication about how badly he has been hurt, Barcelona captain Carles Puyol is set to undergo an operation on his left knee on Wednesday, to deal with a problem that he has been suffering with for more than four months.

Puyol, 33, was originally injured in a La Liga clash with Racing Santander on January 22 and has been struggling for fitness ever since. He was initially out for three months but returned to play three of Barca’s four El Clasico clashes with Real Madrid, only missing the Copa del Rey final defeat to Los Blancos.

The World Cup-winning defender was used sparingly in the Primera Division run-in and only came on for the final three minutes of the Champions League final, as Barca beat Manchester United 3-1 to win a third European Cup in five years.

“Carles Puyol will be operated on at 1400 (local time) on Wednesday, June 1 at the Clinica Quiron to resolve the problems he’s been suffering with his left knee. Following the operation, Doctors Ricard Pruna and Ramon Cugat will speak to the media at the Ricard Maxenchs press room at the Camp Nou.”

Catalan-born Puyol has been at Barcelona since 1995 and is a graduate of the club’s famous La Masia academy. He is third on the list of all-time leading appearance makers for the Blaugranas with 516 games under his belt; only Migueli and Xavi have played more times for Barca.