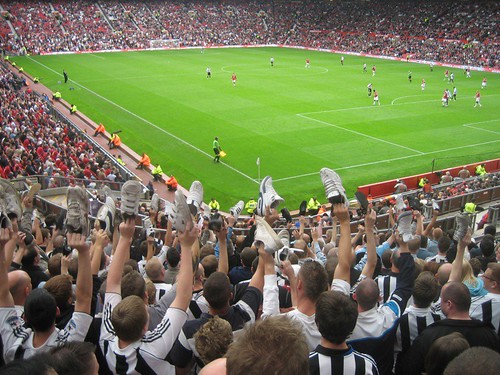 Manchester United extended their lead at the top of the Premier League to seven points following a goalless draw at Newcastle United.

United started the brighter with Javier Hernández and Wayne Rooney both guilty of missing good goalscoring opportunities. First, Hernandez was denied by a terrific save by Newcastle’s Tim Krul inside the first two minutes following a Rooney cross. Then it was Rooney’s turn to be denied by Krul after being sent through on goal by Hernandez.

The first was end to end stuff and Newcastle had several opportunities of their own to score, notable from Jonas Gutierrez and also Peter Loverkrans.

The second half was more of the same, as slowly United started to pick up the tempo as Newcastle tired. But give credit to the Newcastle defence, other than a Ryan Giggs misfired when well placed, and a few speculative efforts from Nani, I don’t think Krul had to make a big save in the second half.

The point moves Newcastle up to 9th in the table with 40 points and pretty much guarantees then Premier League football next season. For United, the draw provides Arsenal with a chance to turn up the pressure tomorrow night if they can win the North London derby against Spurs. An Arsenal win puts them to within 4 points of United with five games to go. A loss or draw ends Arsenal’s title hopes for another season.