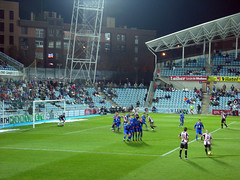 Garcia is one of the rising stars in Spanish coaching circles after winning promotion to the top division with Levante in 2009/10, and then securing his side’s survival in the last game of the following campaign. Levante finished 14th, two places above Getafe, who in turn were just a point clear of RC Deportivo La Coruña in the final relegation slot.

“It’s a beautiful project which will let me develop the way I want,” Garcia he said of his new challenge. “This is a club that wants to keep growing, which is hungry for more. This is a big step in my career.”