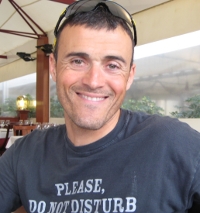 According to reports from Italian news agency ANSA, AS Roma coach Luis Enrique has announced that Sunday’s game against Cesena will be his last game in charge.

Enrique is reported to have told the Roma players of his decision at the end of training Thursday.

Enrique, whose previous coaching experience was with Barcelona’s reserve team, where he replaced current Barcelona coach Pep Guardiola. Enrique has been under fire in recent months after failing to guide the Giallorossi to a place in Europe. Roma had a disappointing campaign this season and the highest it can finish is seventh.

Roma has not yet announced Enrique’s departure that marks the 20th coaching change in the Italian league this season. The previous Serie A record for changes was 15 in 1951-52.

Former Chelsea coach Andre Villas-Boas is in pole position to take over from Enrique, with the Portuguese coach having discussed this possibility for the first time in February.