Lavezzi And Rosi Get Three Game Ban For Spitting 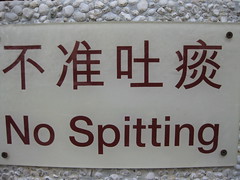 Napoli’s Ezequiel Llavezzi and Roma’s Aleandro Rosi have both been banned for three matches for spitting at each other during Saturday’s Serie A clash between the two sides.

The ‘derby del Sud’ was won by visitors Napoli courtesy of two goals from league top scorer Edinson Cavani, but the win was overshadowed by an off-the-ball clash between Rosi and Lavezzi.

Both players were booked for the first-half scuffle, but the Italian FA later handed out suspensions to the pair after reviewing television footage of the incident. A statement from the governing body read:

“The television images show the Roma play nearing the Napoli striker, and in the following action directed a spit which was immediately exchanged. The spit must be considered an action of violent conduct from the organs of sports justice. The punishment for Rosi and Lavezzi is a three-game ban.”

Rosi claims that he was provoked by his Argentine opponent, saying after the match:

“Lavezzi elbowed me when we were off the ball and from there it all escalated. He got angry and so did I. The referee didn’t spot it, as he was very sneaky to elbow me like that and he knows it. Now don’t go blaming it all on me. Lavezzi was irritable from the start, he provoked me, elbowed me in the stomach and from that moment we got into a row. I spat in his general direction, but I did not get him in the face. I accept advice from those who tell me not to react that way, but he elbowed me first and it all started from there.”