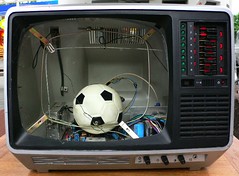 The La Liga season may not end until mid June after next week’s matches were postponed because of a dispute over television revenue.

Clubs want a law, which says at least one game a week must be on free-to-air television, to be revoked. But on Wednesday the Liga de Futbol Professional (LFP) cited a “lack of progress” in talks with the Spanish government to resolve the problem.

The Liga de Fútbol Profesional (Professional Football League), is the governing body that runs the major professional football leagues in Spain. It is the equivalent of the Barclay’s Premier League.

They now say, as things stand, the games will be played on 12 June.

“The board of the LFP was informed of a lack of progress in the negotiations the league has initiated with the government, the Higher Sports Council and parliamentary groups involving a grievance with respect to other sectors,” said a statement. “Therefore, the LFP has upheld the decision taken at the last general assembly on 11 February, which agreed to postpone the round to be played on 3 April until there is a palpable evolution in dialogue.”

Not all the teams support the move to postpone games and according to the Marca newspaper, six clubs; Sevilla, Villarreal, Athletic Bilbao, Real Sociedad, Espanyol and Zaragoza, have asked a court in Madrid to order the games to go ahead.

Spain’s Secretary of State for Sport, Jaime Lissavetzky, also made “a call to reason” for games to be played.

“We’ve been sitting with the league and we have considered many things,” he said. “The main losers are the citizens and football players because the competition has been extended by about 20 days. I hope common sense prevails, and we maintain our readiness to defend the interests of citizens.”