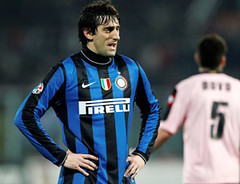 Diego Milito finally got some recognition for his incredible performance last season as was named Serie A Player of the Year, Best Foreign Player and Best Bomber.

Udinese’s Antonio Di Natale was the the other big winner of the evening as he won the Italian Player of the Year and Capocannoniere awards.