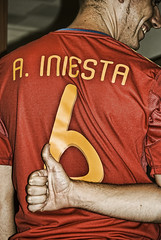 Jose Mourinho’s paranoia has to be growing after Andres Iniesta escaped a UEFA ban after getting a ‘deliberate’ booking for time-wasting.

Iniesta has been cleared of picking up a deliberate yellow card against Shakhtar Donetsk and will not face any action from UEFA’s disciplinary committee, which means he can now play against Real Madrid at the Bernabeu on April 27.

Iniesta had been reported by UEFA officials for forcing a booking in the first leg, which meant he was suspended for the return match in the Ukraine and he would not face the possibility of missing a semi-final tie.

“UEFA has announced that it will not be suspending the midfielder. FC Barcelona appealed to the governing body of European football against the proposal to ban the player for an additional match as a result of the yellow card shown in the quarter-final of the Champions League against Shakhtar on April 6. Iniesta will therefore be able to play in the Champions League semi-final against Real Madrid at the Bernabeu. UEFA have also announced that he will not face any financial penalty.”

What will anger Mourinho is that Xabi Alonso and Sergio Ramos were both fined for similar offences in the group stages.