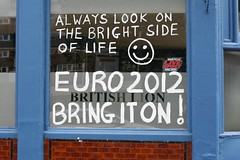 Germany held on for a nervy win over Austria in Euro 2012 qualification while France were held to a draw by Belarus. Liechtenstein earned their first win since October 2007 as they beat Lithuania 2-0.

Group A
Germany edged Austria 2-1 in a much-anticipated Northern European classic in Vienna. Mario Gomez opened the scoring in the 44th minute, only to see the lead cancelled out when Arne Friedrich put through his own net. Gomez completed an impressive night with a winner to stun the home crowd in the 90th minute. The Austrians remain in fourth place while Belgium and Turkey are in second and third respectively following their 1-1 draw. Kazakhstan earned their first points of the campaign by beating fellow bottom-feeders Azerbaijan 2-1.

Group C
Slovenia beat the Faroe Islands 2-0 on the road despite playing 65 minutes with ten men after Marko Suler was given a straight red card for a rash challenge. The win sees the Slovenians, second place in the section, stay five points back of of leaders Italy, who beat Estonia in Modena with Giuseppe Rossi and Antonio Cassano in among the goals.

Group D
Romania are in third place after a simple 3-0 win over Bosnia-Herzegovina while Belarus managed the shock of the day, holding high-flying France to a 1-1 draw, although Les Blues still hold top spot with a four-point gap. Eric Abidal’s feel-good story hit a bump as Barcelona’s UEFA Champions League-winning defender, just back from a surgery to remove liver tumour, scored an own-goal that handed the Belarusians, now in third place, a share of the points.

Group E
Sweden had Galatasaray-bound forward Johan Elmander to thank for their 4-1 victory over Moldova, a result which sees them remain in second place, six points behind runaway leaders the Netherlands. Finland moved into fourth with a tense win over section whipping boys San Marino, Mikael Forssell scoring just before the interval to see them now three points behind Hungary.

Group F
Croatia came from a goal down against Georgia, who beat them in the previous fixture in Tbilisi, to win out 2-1 in Zagreb, a result that takes them to temporary ownership of first place.

Group I
Liechtenstein picked up their first points of the campaign with a 2-0 win over second-bottom Lithuania, who were unfortunate to be twice denied by the woodwork. Philippe Erne and Michele Polverino did the scoring for Liechtenstein, who are now just one point behind the Lithuania and Scotland.

Todays Games
Saturday features a number of enticing contests in UEFA EURO 2012 qualifying, with a Group H table-topper between Portugal and Norway in Lisbon, which could go a long way to deciding who takes top spot in the section and a showdown between England and Switzerland. A tangled Group B, with Slovakia, Russia and Republic of Ireland all tied on points, will see action while Greece look to put Malta to the sword in a wide-open Group F.