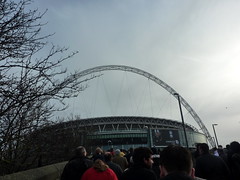 I don’t understand why so few Premier League clubs pay any attention to the Carling Cup as it is their only chance to win a trophy.

The Premier League will be decided between six sides. In all liklihood, those six teams will also win the FA Cup. That means that the only option for a team to win a trophy is the Carling Cup.

Think Arsenal fans would be so up in arms this summer if they had won the Carling Cup last season?

So I have to say I am surprised and disappointed to see that four Premier League clubs went out of the tournament on Tuesday to lower-division opposition.

Shrewsbury dumped Swansea out with a 3-1 win to reach the third round for the first time since 1993. QPR saw the euphoria that has greeted Tony Fernandes’s takeover of the club pierced when they were dumped out following a 2-0 home defeat to Rochdale.

An under-strength Norwich side were ripped to shreds by the MK Dons as the Premier League side suffered a humiliating 4-0 exit.

Finally Brighton striker Craig Mackail-Smith’s goal sent Sunderland spinning out of the competition with a thumping header five minutes into extra time.Defeat for Sunderland soured a week already forgettable for their fans following their 1-0 derby defeat to Newcastle at the weekend.

Aston Villa toiled for almost 80 minutes before goals from Eric Lichaj and Nathan Delfouneso finally saw off Hereford 2-0 in second round.

West Brom secured a safe passage into the third round with a 4-1 win against Bournemouth despite manager Roy Hodgson naming a completely different side than the one that played Chelsea at the weekend.

Mick McCarthy’s second-string Wolves strolled to a 4-0 victory in their second-round clash at League Two Northampton.

Elsewhere Craig Conway inspired Cardiff to a 5-3 extra-time victory over Huddersfield in a thriller.
The Scotland international scored the first goal of extra time before Don Cowie, who had headed a late equaliser from a Conway cross to send the match into an extra period, sealed victory.

Honduras international Ramon Nunez continued his love affair with the Carling Cup as his brace of wonder strikes saw Leeds through to the third round with a 2-1 victory at Doncaster.