England And Germany Get Big Wins In Euro 2012 Qualifiers 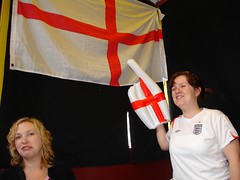 Germany maintained their perfect record and England got back to winning ways, while Slovakia and the Republic of Ireland capitalised on a slip by Russia in Saturday’s Euro 2012 qualifying action.

Runners-up in 2008, Germany have been perfect so far in their campaign and continued their good form with a 4-0 home victory against Kazakhstan. Joachim Löw’s side now lead Group A by eight points.

England joined Montenegro on top of Group G after two goals in the first 15 minutes helped them triumph in Wales and Greece also went top of their pool with a last-minute winner away to Malta after Georgia secured a 1-0 home success against Croatia.

In Group B, Russia’s goalless draw in Armenia allowed Slovakia,   1-0 winners in Andorra,  and the Republic of Ireland, who beat the Former Yugoslav Republic of Macedonia 2-1, to join them on ten points at the summit. Norway and Denmark drew 1-1 in the battle for Group H supremacy while Bosnia and Herzegovina beat Romania 2-1 in Group D.