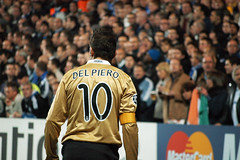 Juventus have signed midfielder Alessandro Del Piero to a one-year contract extension with the club on Thursday.

Even at 36 years of age, Del Piero said he shared a similar passion for the game as he did when he was first starting at Juventus.

“The sensations are excellent, beautiful, just like they were in 1993,” Del Piero said. “I’m happy to be here because as I have always said, I wanted to play for another year. The passion and love with which I train and play has helped me a lot and will continue to help me.”

Club president Andrea Agnelli reaffirmed the simplicity of the deal between Juventus and one of their club legends.

“Alessandro told me that he wants to continue to be the captain of Juventus and wishes to win another Scudetto in the new stadium,” Agnelli said. “These words made me happy. Today’s signature is just a physical action. Del Piero can still give a lot on the pitch and send a message of the club’s values to his teammates. He will also help us a lot next season, which for us will be one of redemption.”