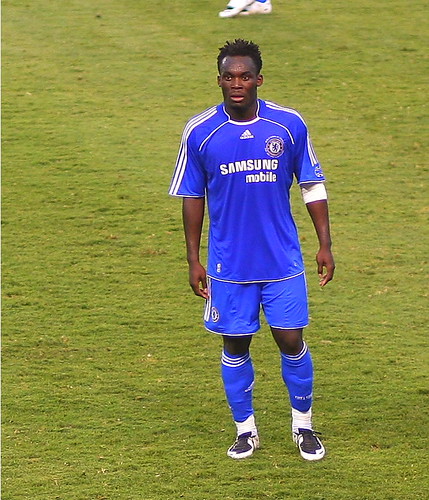 Current EPL leader, Chelsea, runs away again at the top of the table as they extend their gap with Manchester United in second place after Carlo Ancelotti’s side picked up a slender 1-0 victory against Fulham last Wednesday.

The Blues’ only goal on the game was scored by Michael Essien, who in contrary went on to leave the field after earning a red card because making a two footed challenge on Clint Dempsey in the final minute.

Coming off a disappointing defeat against Liverpool, Chelsea started the game in a very attacking attitude as they’re trying to redeem their poor result last weekend. Playing pretty much their best line up minus Frank Lampard, it take until the midway of the first half for the Blues to finally take the lead after Essien headed down Salomon Kalou’s cross right on the the Fulham’s net.

The goal pumps up Chelsea even more as they keep piling up the pressure and created several good goal scoring chances that ware missed by Kalou, Drogba and also Malouda. The slender lead surely didn’t really help the home team in taking it easy as despite not having plenty chances, Fulham did managed to cause little problems with Clint Dempsey and Zoltan Gera’ shots.

In the final minute things gets a little bit awkward for the home team after Essien got himself sent off by the referee as he made a reckless two footed lunge on Dempsey that made the referee pulled out a straight red for the Ghanaian midfielder. This will surely cost some match absentees for the former Lyon player, who has just returned from a slight injury that forced him out of the Liverpool clash last weekend.

The victory now brings Chelsea four points clear of their fierce rival, Man United that only managed to come away with a point against Manchester City in the same day. Although it’s still early and four point gap at this stage of the season can’t really be called as a lot of gap, Ancelotti still cherished it and hoping to keep things the same for the next couple of weeks.