Barcelona And Real Madrid Both Lose 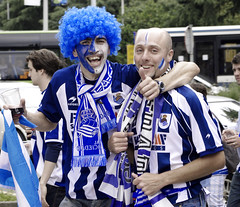 For the first time since August 31, 2008 both Barcelona and Real Madrid lost league matches on the same day. Barcelona squandered the chance to move within a point of retaining the Liga title when they lost 2-1 at Real Sociedad, and Real Madrid lost for the second time at home this season, this time to Real Zaragoza 3-2.

Real Madrid played in the early game and Jose Mourinhio rang in the changes, making eight changes from the team which lost 2-0 to Barcelona in the first leg of their Champions League semi-final.

An uncharacteristic error by Real goalkeeper and captain Iker Casillas gifted Zaragoza their opening goal four minutes before half-time. Casillas came out of his area to but failed to connect with the ball. The ball eventually fell to Angel Lafita who rolled it into the empty net.

Gabi doubled the visitors’ lead from the penalty spot 10 minutes into the second half after Ricardo Carvalho brought Lafita down in the area before Sergio Ramos pulled a goal back when he headed home from a corner.

Angel Di Maria, Mesut Ozil and Marcelo started on the bench and Real looked infinitely more threatening when the trio were introduced early in the second half.

Real dominated possession and pressed for an equaliser but Lafita grabbed his second of the night when he finished off a fine counter-attack with just over 10 minutes remaining.

After Karim Benzema pulled another goal back with a low, angled strike in the 85th minute, Ricardo Carvalho earned a second yellow card and was sent off.

FC Barcelona, who knew the Real Madrid score when they kicked off, had to chance to move e chance to extend their lead to 11 points with four matches to play, but Barca’s 31-game unbeaten run in La Liga came to an end, despite scoring first through Thiago Alcántara.

On 71 minutes the home side were level. There was confusion around the Barca penalty area and Frenchman Griezmann did well to turn the ball back in, where Ifran, finished delicately.

Six minutes later, Barca thought they were back in front when Milito headed home a Xavi free-kick at the back post, but the assistant referee waived the goal off for offside. A bad decision.

Barca had two chances to equalise themselves. First Jeffren had a shot saved which Messi almost scored from on the rebound. Afellay then danced into the box and Bravo again made a stop, this time from point-blank range; Jeffren stabbed for goal only to see his shot blocked on the line and Thiago, also following up then blasted over from eight yards.